The story of the birth of Maya Juliet

Here's the story of how Maya Juliet came into our lives.

On Tuesday November 24th, Jess and I had a fairly routine check-up at the ATU testing unit at Beth Israel Deaconness Hospital (in Boston). We had been to this testing unit a few times before, and they were monitoring her amniotic fluid level closely. On November 5th, her amniotic fluid was at 9.0, but by November 19th it had dropped to 7.5. Our doctor had told us that if it dropped below 6.0 then it would be time for the baby.

Although we knew low amniotic fluid was a possibility at this visit, from our perspective it seemed pretty unlikely that it was time for the baby. Jess was still working everyday, was only mildly uncomfortable, and was still getting up and down the stairs with ease. So while we knew it was a possibility, it didn't seem like a *real* possibility. The doctor had previously told us to throw our bags in the car. So we did -- although we didn't pack like we would if it was the real deal.

Off we went to our 3pm appointment. We were a little nervous, but we were pretty certain that we would spend the long Thanksgiving holiday enjoying our last long weekend as just the two of us. We also still had a few things to do around the house. And of course, we still had to pack completely. At the appointment, I held Jessica's hand tight as the technician did the amniotic fluid reading: it was 5.7.
"What?!?" Jess and I both thought. "How can that be? What does it mean? What?!?"

Even though the fluid was at 5.7, we knew that it wasn't a cut and dry case. Fluid levels can change depending on the position of the baby, and taking a measurement is more of an art than a science. Plus, the reading was *just below* the level where we knew the baby had to come out right away. Based on this knowledge, we understood that the doctor would make a judgment call about whether or not it was time. So we waited for the OB doctor to call us. We didn't know what to expect.

Fast forward ten minutes -- and we were on the phone with the OB/GYN. He cut right to the chase and told us that it was his "strong recommendation" that we have the baby right away. We could not believe it. As Jess held the phone up to her ear, we looked at each other with shock in our eyes. We asked questions about the fluid level, and how they do the measurements. He told us the textbook answers -- when the fluid drops below 6.0, and the baby is 39 weeks -- it's time. He repeated his strong recommendation that we needed to go up to the 10th floor to Labor & Delivery right away.

Bewildered, we went from the 7th floor to the 10th floor to meet with the OB that was on-call. We sat in the waiting room for about twenty minutes, discussing what we had just heard. While we understood what the doctor was recommending, we also learned that the fluid level could change based on the baby's position. The fluid level was only slightly low -- and the technician told us that there was lots of fluid near the cord. Based on the standards, you can't "count" that fluid. We understood that ultimately, it is a judgment call and doctors always act conservatively in these situations.

We went in to see the OB on call, Dr. Diane Kaufman. She sat with us in a private room and discussed the test results. She was very understanding of our feelings, but firm with the recommendation. And she also made it clear that the baby was in no immediate danger and was doing well. She told us that there were no guarantees, but it was very unlikely that something bad would happen if we waited a few hours. After some discussion, she left the room for Jess and I to talk alone.

We debated back and forth the possibilities -- and spent a few minutes coming to the realization that the baby was coming soon in any scenario. Our long weekend together was no longer a possibility, and the baby wasn't going to wait until December. Now the only decision left was whether or not we should take a few hours to get our house and mental state in order. Looking into Jessica's eyes, I could see that she wasn't ready. She needed some time to get mentally prepared for this big operation. We didn't have the basics of what we wanted to have at the hospital (keep in mind, we never really packed properly). So, after some gut-wreching discussion, we made the decision to go home. Yes -- we decided to ignore the doctor's strong (albeit conservative) recommendation, go home for a few hours, and return to the hospital when Jess was ready. The doctor understood -- and was mildly supportive. Just like that, we left the hospital and went home.

During the car ride home, we spent a bunch of time talking about the realization that we could essentially pick the birthday of our baby. If we only spent an hour at home, we might be able to get back in time for November 24th. But if we spent a few hours, then November 25th was more likely. So Jess read me the Wikipedia entries for the two dates as we drove home. We learned about historical events and famous people's birthdays for each of the days. We chatted quietly about what we needed to do when we got home. And we held hands as I drove. The traffic on the ride home was very bad (Thanksgiving weekend traffic), and it took us more than an hour and fifteen minutes to get home (usually thirty minutes). On the way, I called both Jessica's mom and dad to let them know what was going on.

At home, we rearranged the furniture in the baby's room and we vacuumed. Then we each packed our bags (which I had to get from the car so that they could be properly packed). We both responded to a few emails. Jess took a shower, I shaved my head. Finally, we took a few videos to capture the moment. It was a surreal two hours at home -- quietly doing our final baby preparations, with the full realization that we were on our way to the hospital to have a baby.

Jess was understandably very nervous, and wanted to hurry up and leave. I did my best to get going as fast as we could, but it did take some time to load up the car (this time I packed the car seat in the car too). Then I got the dog food we needed to drop off at our dog sitter.

We left the house at around 9:00pm. We stopped in Newton to drop off the dog food -- and Jess decided to come in and say hello to our puppy Roxxee (and Dan/Nora too). It was another surreal moment: not only did we go home and pack, but we also stopped and visited with friends on the way to the hospital.

We finally arrived at the hospital at around 10:00pm. In the lobby, we met Jess's mom, sister, and Kathy who had all come down from New Hampshire. We had a few moments together in the lobby, which ended in a group hug. And then we went upstairs to the 10th floor to labor and delivery.

We checked in at around 10:15pm, and Jess filled out a bunch of forms while I posted an update to Facebook "Baby time. Yep, like now. Checking in at registration. Muppet show theme song playing on TV in waiting lobby!" And then, before we knew it, Jess was getting pre-op tests. We were told that they were ready for us, and we expected to be in the OR on the 24th. But after an hour of tests, and a bunch of answering the same questions over and over again to the different nurses and doctors, and some unexpected waiting, the clock struck midnight. We wouldn't have a baby on the 24th -- it would definitely be the 25th. Around 12:10am on November 25th, 2009, Jess was wheeled into the OR. I joined her in the OR after her spinal block had been started. The surgery began, and I stroked Jessica's forehead and quietly talked to her the entire time. Within 15-20 minutes, we heard the words of the doctor "And now I'm taking out your daughter." The time was exactly 1:00am.

And that's the story of how Maya Juliet came into our lives. 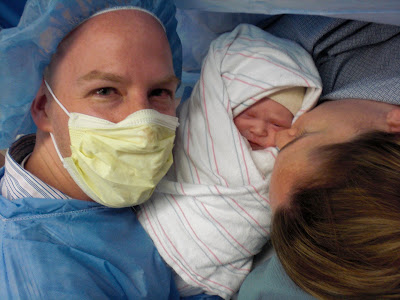 Emma came into the world just as suddenly as Maya! It was a whirl wind! Congrats again. It is amazing, isn't it?